The Best Five Books for Rebooting Your Business 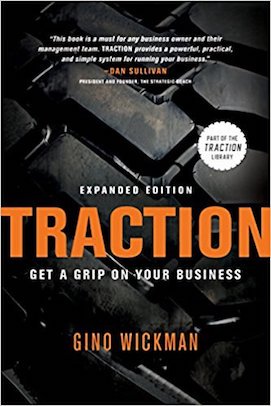 There’s a huge difference between running a business and running it well. Plenty of leadership books tell you what success looks like, but not how to get there. 303 Software CEO & Founder Matt Jaffe shares his top-choice reads for their practical approaches as much as their insights.

I’ll tell you right from the start: I don’t like most books about business, especially business leadership. Too many of the ones I’ve read are full of mumbo jumbo, focused more on big ideas and less on the steps needed to execute them. I can learn what a servant leader is and does, but not necessarily how to actually be one on a day-to-day basis.

After picking up—and putting down—plenty of recommended reading, I’ve found these five books to be the most influential in shaping my own business philosophy and, in some cases, radically improving the entire operations of 303 Software. We’re even featured in one of them—but not for the reasons you would think.

If you’re not sure where to begin when it comes to developing your leadership style, start with Bill George’s True North.

According to Bill, strong leaders are authentic individuals: they follow the direction of their internal compass, even when that needle moves. If your story of who you are and why you do what you do can’t change, it means you’re not changing. And if you’re not evolving, not growing, then you’re probably losing relevance and relatability. Once those are gone, how will you connect with people?

True North is packed with dozens of examples of CEOs and moguls (Oprah Winfrey, Starbucks founder Howard Schultz) who found and kept their footholds as effective leaders by being true to themselves. While the stories are inspiring and his philosophy makes sense, it’s the series of questions and self-evaluations he plants throughout the final chapters that make his ideas feel concrete and executable. It’s a push in the right direction for anyone in charge of, well, anything.

Jim Collins’ business-first approach in Good to Great makes it easy to do away with small distractions, which can be every business owner’s downfall. Jim doesn’t believe in sacred cows: he isn’t interested in flashy celebrity CEO’s or even, to an extent, strategy. Instead, he pushes leaders to live their mission, practice brutally honest self-inspection, and define their economic denominator (i.e. the one component their economic functions essentially roll into—in our case, the billable hour).

Collins has a great talent for distilling business needs into big-bite concepts, using simple words like “eggs,” “buses,” and “hedgehogs” to describe obstacles and solutions. I’ve adopted his “flywheel” approach to operations: if you want sustainable change, implement the right processes and motivate your team to keep putting their shoulders into turning the wheel by showing their work’s positive results. Soon enough, that flywheel builds momentum and starts spinning faster, and with far less effort. I can’t say enough good things about it.

Another plus for Jim and his book: he uses case studies to show how leaders of major companies transformed their businesses from good to great. Which is awesome.

Traction is the first business book that I ever really liked, and Gino Wickman’s trademark “Entrepreneurial Operating System” (EOS) has shaken up and turned around over 8,000 companies in the last 10 years—ours included. 303 Software has 100% implemented the Entrepreneurial Operating System: we run our entire operation on it. There are so many great concepts in Traction, and here are several of my favorites.

Level 10 Meetings are weekly reckonings that identify and solve problems through discussion. They’re strict and structured: you don’t reschedule, and you don’t get off-topic. We also stay on track with Scorecards; while they’re not a new concept, as Gino points out, he does provide a step-by-step guide on how to build the right one for your company. He also expanded one of Jim Collins’ concepts, having the “right people in the right seats,” by illustrating how that can be realized by using an Accountability Chart and the GWC tool: finding people that get it, want it, and have the capacity to do it.

Using these methods, it’s almost impossible to botch accountability and task follow-through. And if Traction became our tool kit to turn our business around, Chris Hallberg of The Business Sergeant’s Field Manual (next up) was the architect to show us how to use them.

This book hits close to home, and I can say without exaggeration that 303 Software wouldn’t be here without its author, Chris Hallberg. Chris was our EOS implementer (see above) and he literally saved our business.

Chris is a disciple of Gino Wickman, and has built his own small empire out of helping businesses put Traction principles into play. Several years ago, 303 Software was struggling: we were losing focus on our bottomline, getting distracted by side projects, and losing our overall discipline. Fearing collapse, we reached out to Chris, an exceptional facilitator of Traction EOS® who has zero tolerance for BS. He looked us in the eye and told us exactly how we were failing.

This was by far the most difficult and rewarding process we’ve been through in operating 303 Software. Stefan and I had to take a hard, honest look at our entire organization. Everything was on the table, including our own roles, and we had to own up to what was working, what was failing, and what we needed to change to survive.

Chris had us on the path to a turnaround in less than 6 months, and we’ve been rock-steady ever since. If you want the gritty details of how he did it, pick up his Field Manual—we’re one of his case studies.

“We go through our days responding and reacting, but it’s rare to really pause and ask: Is this thing I’m about to do consistent with what I believe? Or, better: Is this the kind of thing the person I would like to be should do?”

This is probably my favorite quote from Ryan Holidays’ The Daily Stoic: 366 Daily Meditations. Admittedly, this book has nothing to do with business management—but it has everything to do with how I run my business.

I’ve seen Ryan speak. He’s charismatic and thoughtful, and I can see how his sharp wits brought American Apparel to its level of fame. While this book is way more philosophical than the others on this list, its format broken down into a brief daily practice of pausing to read, reflect, and learn that makes its intention feel as attainable as any of the other books listed here.

Most importantly, from this book I learned how to not waste my thoughts and energy sifting through things I can’t control. Instead, I focus on how I respond to whatever is in front of me.

Holiday says Stoicism is “built for action, not endless debate.” It’s a blunt statement, sure, but this book has given me great tools to reshape my thinking in both my professional and personal life, and I can’t argue with the value of that.

If these these books have a common theme, it’s about getting rid of distractions and focusing on the most essential factors that will help you lead your business to success. In reading them, I’ve learned a counterintuitive lesson: leaders need to be able to see and admit their weakness at any given time. It’s tempting to want to look good and save face when you’re the person in charge, but problems can’t be solved without acknowledging and understanding them. That’s what our entire company is built upon: solving client’s problems and developing the best possible software to do that. And if we need to be able to do that for our clients, we need to be able to do that for ourselves.

Be honest, be humble, and be willing to change when its time has come.